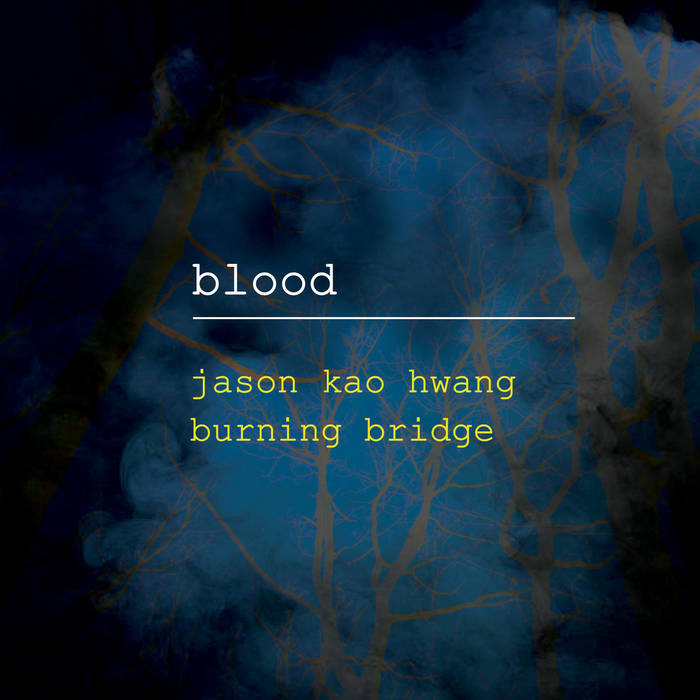 Jason Kao Hwang is a unique artist. He is a composer and a conductor and violinist and he is one of the frontrunners in creative jazz...With the talent he holds he could easily branch into the Classical Music field - and actually that is exactly what he has accomplished: he melds the jazz idiom with classical music structure and creates works such as this BLOOD... An uncompromising vision as it is challenging. Fine artistry on every count. - Grady Harp, Amazon, Oct. 18, 2018

What’s always most striking about Jason’s work, whether solo or in ensemble, is the originality… he ALWAYS provides a listening experience that’s different – and WONDERFUL... I give Jason and his ensemble a MOST HIGHLY RECOMMENDED, with an “EQ” (energy quotient) rating of 4.99 for this diverse and challenging album. Dick Metcalf, editor, Contemporary Fusion Reviews, October 15, 2018

They’ve found a way to make “East meets West” work. This is a fascinating, rather chilling, but ultimately inspiring set of music, unlike anything most of us have heard. Not only are the compositions challenging and far reaching but the Burning Bridge ensemble consists of a unique set of instruments. Jim Hynes, makingascene.org, Nov. 12, 2018

By constantly alternating the density of the orchestrations, Hwang suggests different scenarios that correspond to transformative states of mind. The thrills of spontaneity come from individual statements but also from interspersed interlocutions with two or three musicians. After all, this is music of exploration and reflection. Felipe Freitas, jazztrail.net, Nov. 13, 2018

Blood by Jason Kao Hwang and his Burning Bridge ensemble represents the latest masterwork to date in the oeuvre of one of the jazz avant-garde’s most original compositional voices: an uncompromising artistic vision as captivating as it is challenging. Hwang succeeds here at incorporating improvisational statements into unified compositional schemes with what strikes me as a cinematic, directorial style, an engaging conception of sonic cinéma vérité. His mastery of musical mise-en-scène allows him to place his outstanding cast of artists within well-structured soundscapes, across which he pans with lyrical lines and propulsive rhythms that his soloists continue seamlessly, as he zooms in to foreground their candid improvised responses to the challenging situations in which they find themselves. The compositional stage-sets he conceives showcase an activist aesthetic of polycultural hybridity, in which uniquely orchestrated sounds combine to evoke overtones of his own Asian American history and location. Building upon Burning Bridge’s acclaimed debut recording (2012, Innova), he brings experimental jazz styles into mutually enriching dialogue with traditional Chinese music in order to confront, contemplate, and counteract the unspeakable violence whose disturbing, unrelenting echoes engendered this piece.

He explores this harrowing theme across some 28 painstakingly staged scenes, comprising a continuous play of sound divided into five acts. The first act begins and ends with the reverberations of distant bass explosions with flying treble debris, in between which ensemble lines guide brass soloists through unfolding ritual contexts, and freeze-frame sustained tones launch duos or trios into intense dialogue; collective improvisations flow seamlessly into individual statements, which in turn give way to lyrical contrapuntal melodies before returning again to ensemble extemporization. The second act opens with a mournful ceremonial procession that suddenly transforms into a bluesy strut over a sinewy rhythm-section groove that carries violin and cornet solos into juxtaposition with subsequent erhu and pipa solos, which lead into a climactic syncopated ensemble passage. The third act returns to the ritualized austerity of the first, with a tuba solo over processional strings, followed by freeze-frame pipa-percussion and trombone-erhu-bass dialogues, flowing into aggressively rhythmic ensemble figures that set off an explosive drum solo, over which a concluding free-rhythm coda ultimately marches off. The fourth act brings the beat back, with an angular ensemble passage launching a series of bluesy solos over a muscular shuffle groove, which further propels violin-led call-and-response exchanges into collective improvisation that resolves into to a world-weary ensemble reprise; even the funky violin solo and light-hearted string passage that follow cannot prevent the return of repressed, collectively improvised, traumatic memories. The final act expands the first’s reverberating booms and flying debris into bass and tuba solo salvos underscored by string shrapnel, introduced, bridged, and concluded by poignant ensemble prayers for peace.

The impassioned realization of this ambitious script owes much to the empathetic artistry of the virtuoso ensemble Hwang has assembled and sustained since 2009, with support from Chamber Music America, the Doris Duke Foundation, and U.S. Artists International, as well as performances at Edgefest, the Vision Festival, the Victoriaville Festival de Musique Actuelle, the Chicago World Music Festival, the University of Massachusetts, Flushing Town Hall, Roulette, and the Bop Shop.
- Scott Currie

Driving down on an unlit highway, my headlights flashed upon a bleeding deer carcass. My heart rate thundered and lungs exploded as I swerved away, narrowly avoiding a collision. This shock made me reflect upon my mother’s harrowing experiences in China during World War II. While in a Changsha pharmacy she was knocked unconscious by a Japanese bomb. She awoke as the lone survivor surrounded by the dead. I also thought about Butch Morris and Billy Bang, musicians I’ve worked with who fought in Viet Nam. The magnitude of sorrow that they endured is unimaginable.

Blood meditates upon the emotional traumas of war retained within the body as unspoken vibrations that reverberate throughout communities and across generations. Through Blood the violence of deeply held memories are not relived but transposed into our sound. Blood in our sound rises within our song.

Extreme danger triggers powerful forces of “fight or flight”. This conflict can produce an immobility response, which penetrates and remains within the body as emotional trauma. Similarly, when a bomb explodes, there is blast wave outward that leaves a near vacuum in its wake. This is filled by an equally deadly blast wind in the opposite direction. Within an explosion, Blood was created. – Jason Kao Hwang

This recording was made possible by the generous support of our GoFundMe supporters. Our deepest thanks to: