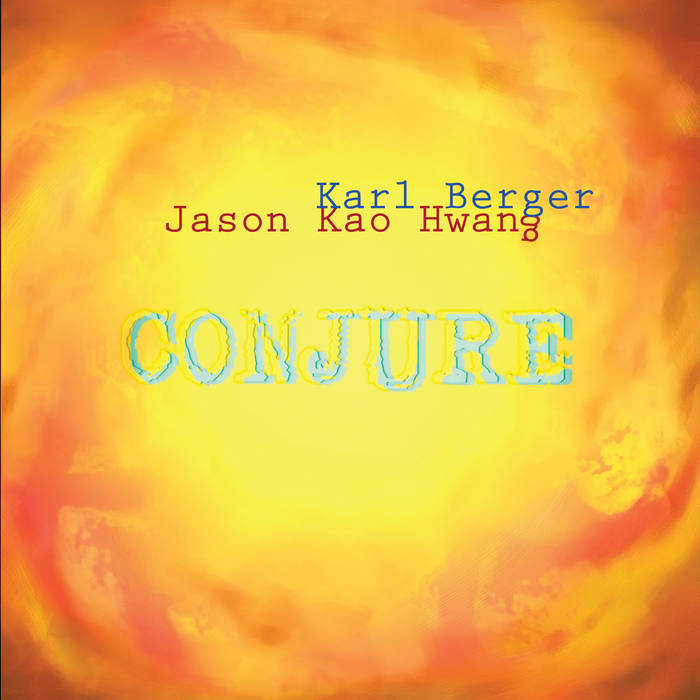 It was a crisp, sunny March afternoon when I drove up to Woodstock to record with Karl in his home studio, which is named after his wife, Ingrid Sertso, a great vocalist. Having played in Karl’s Creative Music Orchestra, we were familiar with each other and understood that our music making of that day would be spontaneous and unpredictable, as life is. Without written score or any predeterminations we opened ourselves to each other into the unified mystery and light conjured within each of these journeys for which I am grateful.
– Jason Kao Hwang

I want to thank the moment and circumstance in time that got us together for this music. – Karl Berger

The music of Jason Kao Hwang (composer/violin/viola) explores the vibrations and language of his existence through compositions of transformative journeys. He currently leads the octet Burning Bridge, quintet Sing House, and the Critical Response and Human Rites trios. In 2019, 2013 and 2012 the El Intruso Jazz Critics Poll voted him Violinist of the Year. The 2012 DownBeat Critics’ Poll voted Mr. Hwang as Rising Star for Violin. As composer, Mr. Hwang has received support from Chamber Music America, US Artists International, and the NEA. As violinist, he has worked with Tomeka Reid, William Parker, Pauline Oliveros, Anthony Braxton, Butch Morris, Oliver Lake, Henry Threadgill, Reggie Workman, Ivo Perlman, Patrick Brennan, and many others.


"Conjure by Karl Berger and Jason Kao Hwang stands as a masterful combination of both jazz and classical styling which makes for an incredible listening experience." - Vincent Teneriello, kuci.org

"Karl’s piano/vibes and Jason’s violin/viola will summon spirits from your inner depths and take you on a journey like you’ve never been on before." - Rotcod Zzaj, Contemporary Fusion Reviews

"Conjure..features eight improvised pieces that show their constantly openness to the moment... The opener, “Prophecy”, confirms that their voices make sense together. Berger launches the journey with a low-toned piano pedal, angular musings, and some caustic chordal movements. For its part, Hwang’s melodic narrative is as dramatic as it should be, and we can almost sense the tears suggested by his violin cries." - Felipe Freitas, Jazz Trails

Listening to Hwang coax amazing sounds by plucking his strings on “Vanishing Roots” or Berger’s unpredictable piano chords and vibraphone notes may be unlike anything you’ve heard from a duo. - Jim Hines, makingascene dot org

"***** Liltingly lyrical, the duo’s compositions continue to impress, as does their impeccable musicality... Not only are the performances excellent, but also the messages within them are profound... Multi awarded and critically acclaimed, this recorded experience further substantiates the importance of these two exceptional musicians. Highly recommended." Grady Harp, amazon dot com